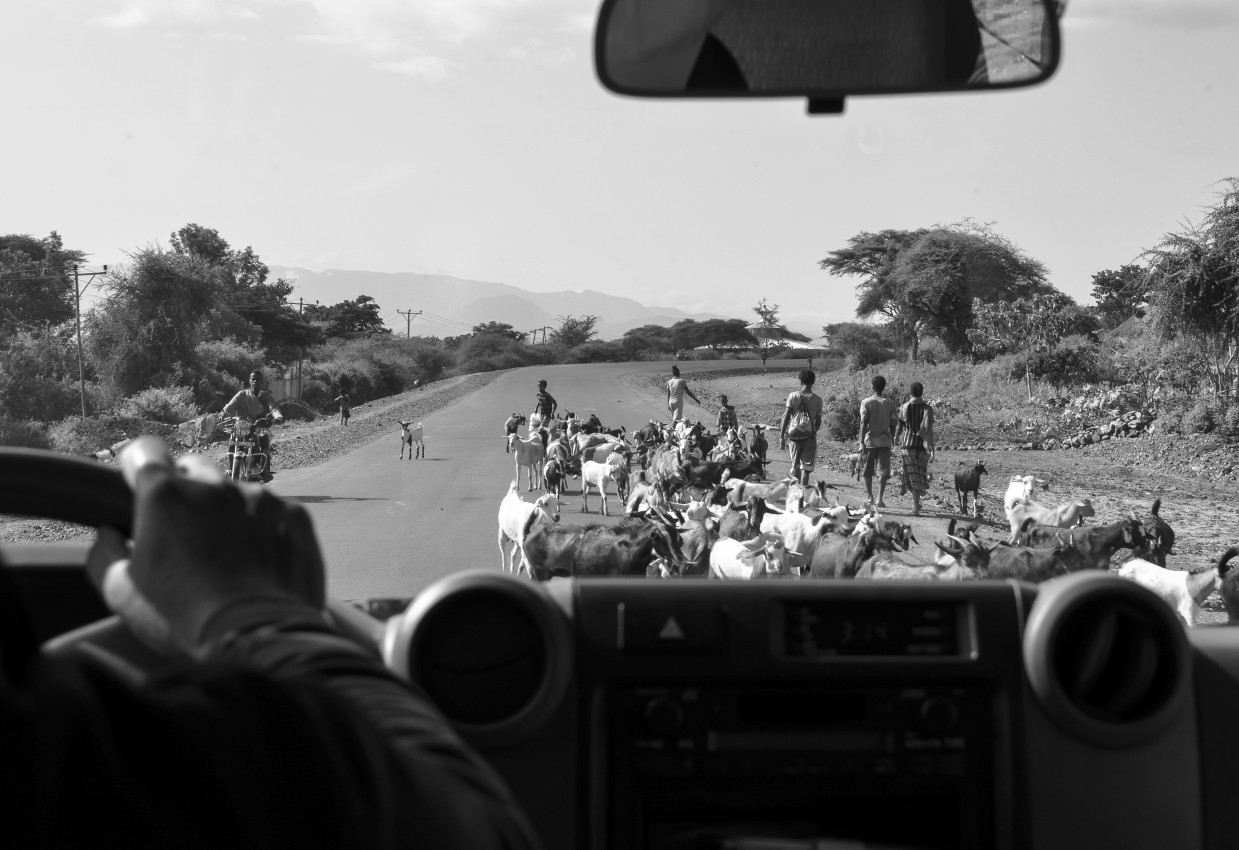 In the far south of Ethiopia lies the market town of Turmi, a remote and dusty settlement, located deep within miles upon miles of dry scrubland.

We drove to our campsite and pitched our tents on the bank of the Keske River, the perfect setting for four nights stay with the Hamar. We had come with the hope of being invited to a bull jumping ceremony, one of the most incredible rituals in the valley.

Colobus monkeys dashed and chatted amongst the fig trees, their long white tails, drooped low from the canopy. Vultures swooped silently over the baked riverbed before settling high in the acacia trees on the far bank. The distant clatter of cow bells, rang along the bed, far, down to the rocky island that jutted up out of the dry sand. Goats, goats and more goats sat in the shade, taking refuge from the heat whilst young shepherds dug deep into the earth to find water for their flock.

With Baboons bounding across the river bed, throwing up dust as they ran, the golden light of the setting sun, started to slowly creep across the sky.

It was here when U.K’s Channel 4 arrived, a crew of 25, rigs, generators and all, for a two month stay with the intention of filming Hamar life and of course the build up to an unmissable bull jumping ceremony. 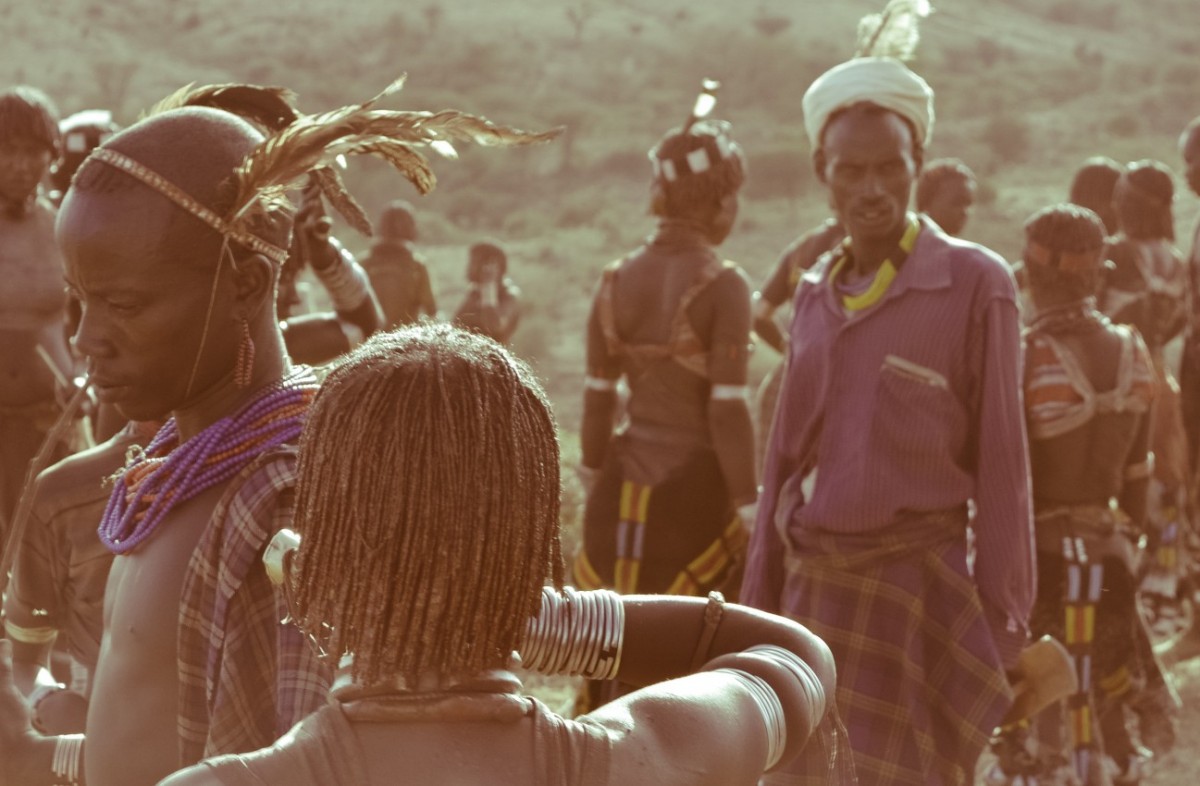 There was news of a bull jump happening in a ‘nearby’ village. But due to the lack of telephones, roads and vehicles, it is only by word of mouth how we received this information. Described as one of the most incredible rituals to experience in the world, to miss this spectacular event was simply not an option, especially on our final day with the Hamar.

It was 3pm, and the ceremony, which lasts around 3 days was well underway, so I grabbed my cameras, and vital spare batteries, and rushed to the vehicle.

We took a local boy, aged 16 to guide us to the remote village, however with no roads to navigate by, this proved a little tricky. We aimlessly bounded between acacia trees and followed the dry riverbed upstream. About 30 minutes later we arrived at a small and sleepy village. No spectacular celebration was occurring here today, however a local did think that a ceremony “may” be taking place about an hour away. We dashed back into the 4×4 and sped back through the sand, remembering which rock or termite mound we had turned at.

Finally back in the main channel, we carried on our mission, and after passing a line of camels and women on their way to collect water, we soon spotted some other 4×4’s that had heard of the potential news. We snaked our way for a further 10 minutes until the riverbed became too narrow and the vehicle could go no further, it was on foot from now on.

We followed some elders up the dry creek bed. Green and white paint, zig-zagged in patterns up to their thighs. Ostrich feathers, fixed to their heads danced in the light breeze, but the old Ak47’ s slung over their shoulders reminded us of the troubled land we were in. 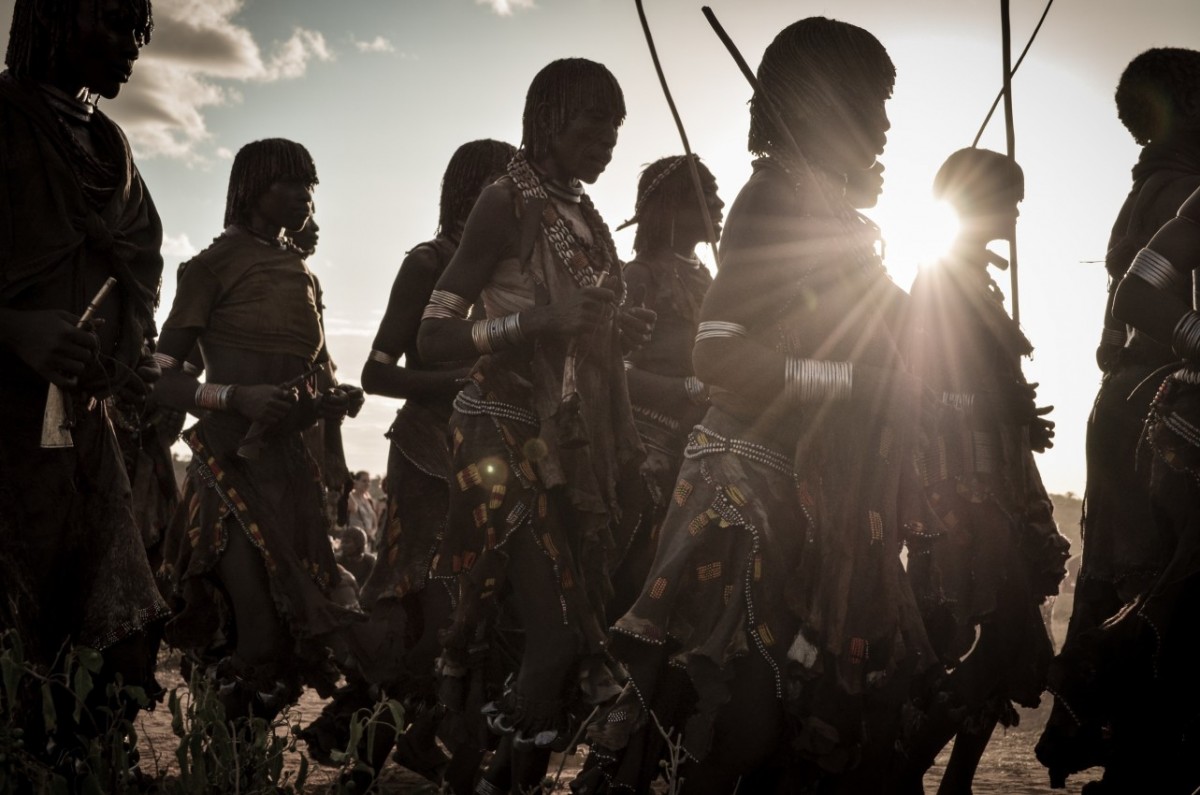 We walked for about an hour in the dry heat until, finally reaching a cool and shaded opening. Hundreds upon hundreds of tribal men and women, children and elders came marching up the river. Feet were stomping, horns blowing, bells clanging and women chanting. The noise was intense and deafening.

Beautiful goatskins worn as dresses were intricately decorated with cowry shells and yellow beads. Their hair, braided with butter and red ochre swayed gently above their shoulders as they marched through the sand. Like their hair, red ochre and butter had been rubbed into their skin creating a striking tone of reddy-brown that glistened in the dappled light. Hamar men are just as impressive. Tall, elegant, with brightly coloured loincloths wrapped around their waists. In the shade, hundreds of Hamar girls settled on the banks of the dry river, crouching between the thorn bushes, watching with awe and wonder. However, I couldn’t help but notice a few anxious faces as the whipping ceremony began.

It is a sight hard to watch and one that is even harder to explain;

Presented with a bunch of branches, the Maza carefully selects the cleanest and smoothest stick. Removing any thorns or edges that would prevent a clean cut. He holds it reluctantly as a woman, (a close friend or relative of the boy jumping) harasses and teases him. Shouting, trumpeting, and flicking him with cow tails. After a good few minutes she is transfixed deeply into the rhythm of the dance, she starts falling slowly, into some hypnotic trance. And with one quick and tidy whip, he strikes her, perfectly timed and positioned on her back as she jumps and spins in the air. Not one flinch not one scream.

Shocking, yes. Painful, surely, however, not once did it appear abusive or aggressive. This is not a beating or form of domestic violence, it is actually a bizarre representation of empowerment on behalf of the women. They essentially belittle the men by pleading to be whipped again, implying that the men are too feeble to whip hard enough to hurt them.

The deeper the scar, the more love the woman has for the Ukuli.
A friendly member of the Maza, led me straight to the front of the crowd. As a guest he wanted me to have the best view. This however did not please one elderly woman, who clobbered me across the head, in her fury. I found this totally reasonable, as she had probably walked three days to get here! I crouched low as the Ukuli leaped four times, across the backs of the ten castrated bulls. 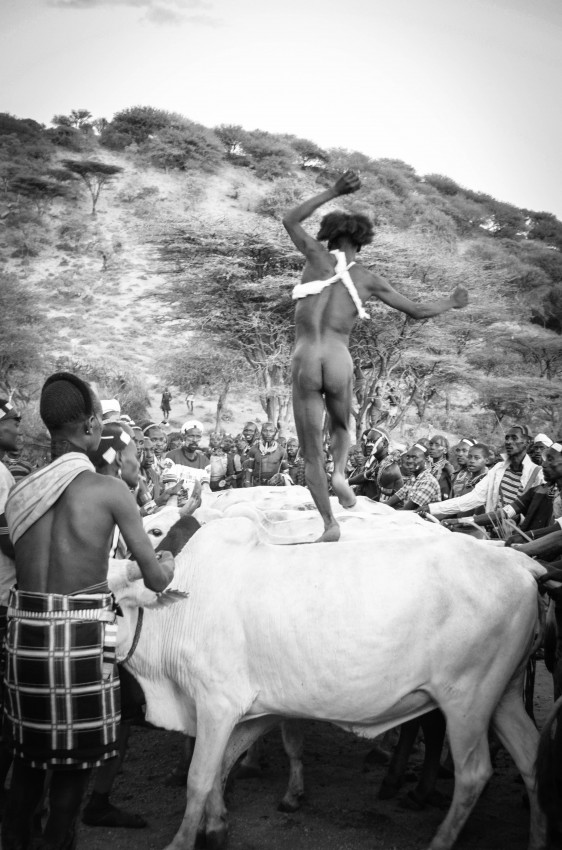