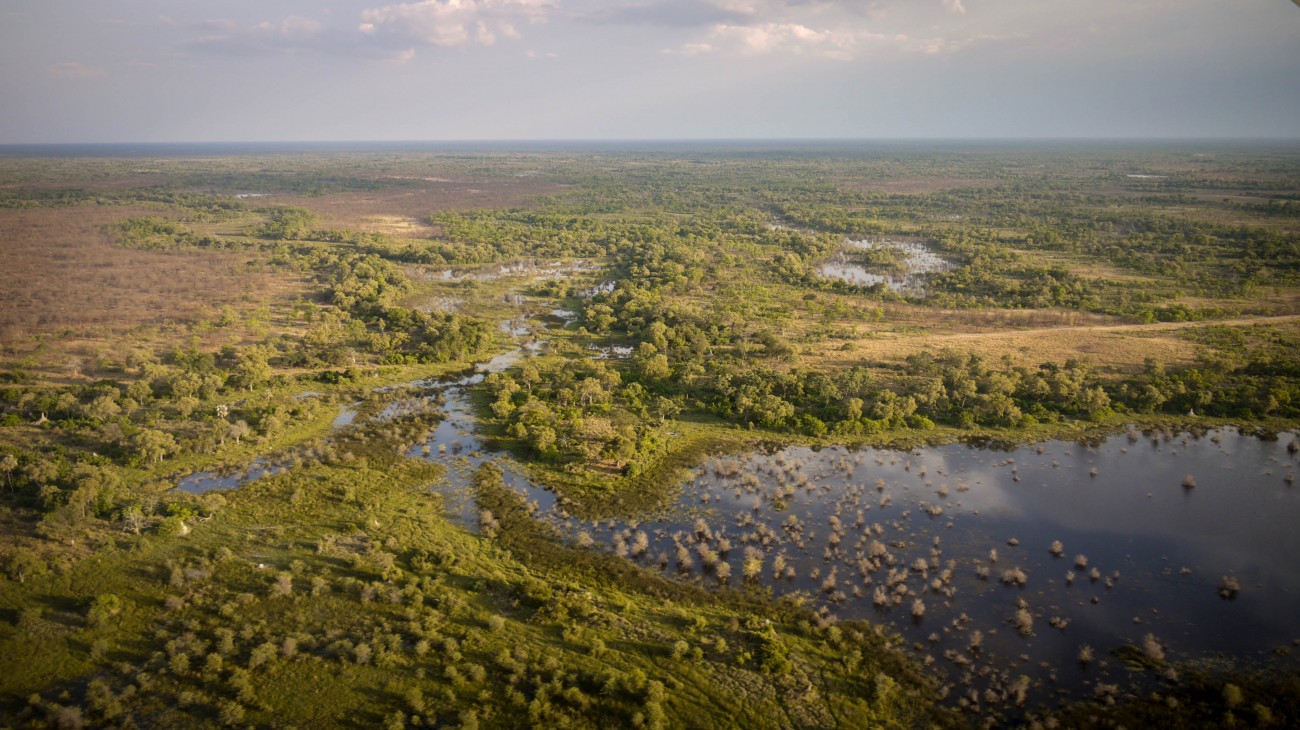 Sat on the runway at Maun’s Airstrip was our GA8Airvan, a tiny eight seater aircraft waiting to take us up, for an hours flight to view the magnificent delta from the air. We climbed on board, and set off down the runway, our seats only a few inches above the hurtling tarmac. As we rose out of Maun, high above its busy streets, it wasn’t long until dusty roads turned into winding rivers. Our little plane bobbed on the warm air, floating above incredible views of a flooded world, at a height where its vastness and great diversity can be truly appreciated. Pure blue waters and green marshland swirl to the horizon creating one of the most spectacular wildernesses on our planet, the Okavango delta.Located 800 miles from the Atlantic and 1000 miles from the Indian Ocean, with no lake or sea to flow into, the Kavango river flows from the highlands of Angola, snaking its way through Namibia. As it finally swells into Botswana, the floodwaters create one of the largest inland deltas, on earth. This immense oasis spreads over nearly 15,000 km², where 95 % of the water is eventually evaporated into the vast Kalahari sky.

With our eyes fixed on the lush marshland below, our pilot, kept the plane in 360, circling above Solitary bull elephants ploughing through the shallow water. We soared over large herds of buffalo grazing on fertile islands and Giraffe, striding across the palm studded plains as the evening sun cast their long shadows. Amid the web of waterways hippos peppered the landscape. 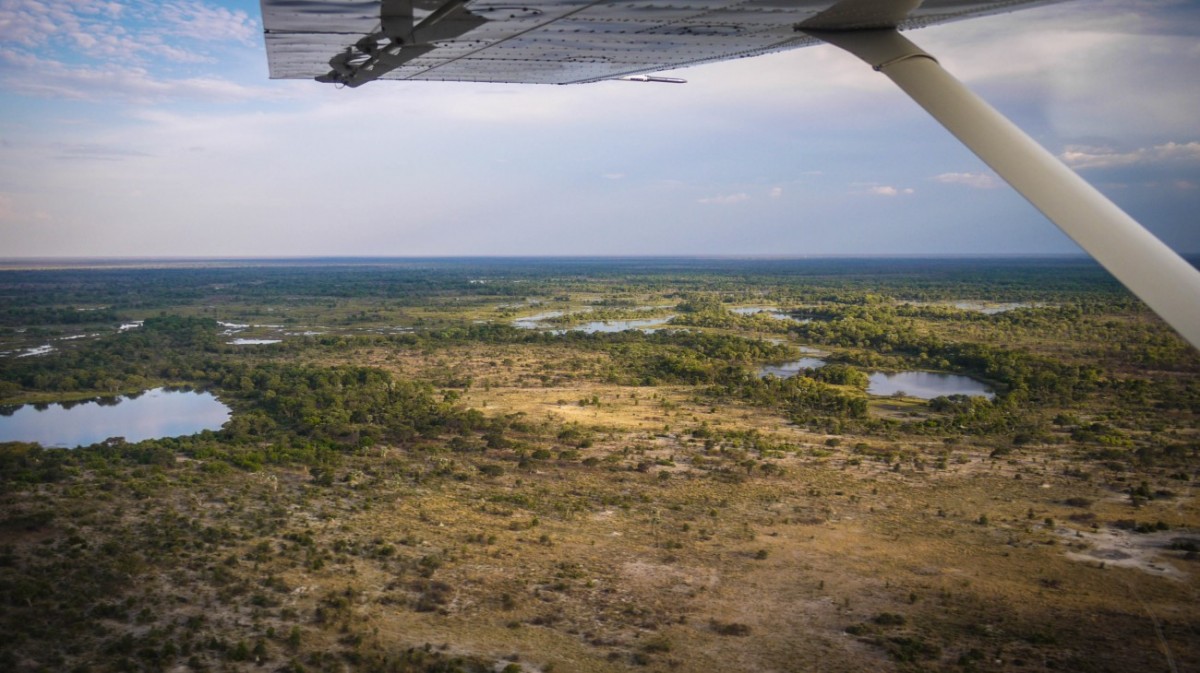 Herons, storks, egrets and fish eagles flapped up out of the reeds, gracefully gliding into the cloudless sky. We soon swooped lower over herds of Zebras as they dashed through the sparkling water, leaving a string of white splashes behind them. Leaving this spectacular untouched world behind us, we headed back to Maun.

The following day, after transferring all our supplies onto mokoros we left the backwaters of Maun and gracefully glided off into the labyrinth of channels. In Africa the hippo is renowned to be the most violent animal in the wild, killing more people per year than lions, leopards, elephants, buffalos and rhinos combined. So at first thought, I couldn’t help but think that travelling down channels dug out by these creatures seemed like a very bad idea. 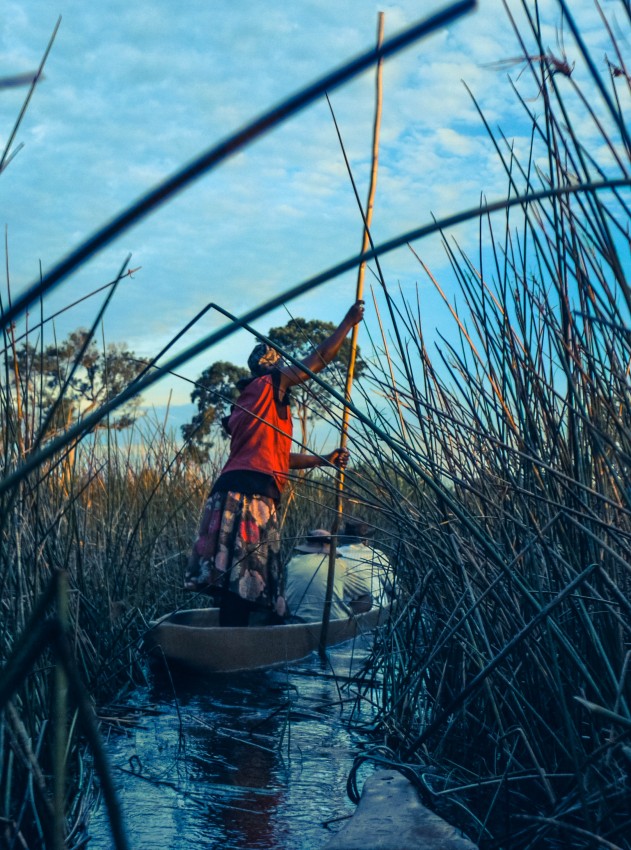 As I lay in my slim Mokoro, my eyes on the same level as the water I listened to the “swish”, “swish” of the boat as it brushed between the towering reeds. With the ripples gently lapping the side of the mokoro, and the warm sun settling on my face. I soon found that there is no other more peaceful way of navigating this wonderland and it wasn’t long until I drifted silently into my dreams. Two hours later we finally arrived at a small island, our home for the next four days, a dry refuge deep inside this wild wetland. Surrounded by nothing but a sea of reeds and grunting hippos, we carried our supplies out of the Mokoros and started to pitch our tents in a small clearing. With no facilities at all, our wood fire in the centre of our island was also our main source of light in the evenings. With a dig and bury toilet, situated a short walk from our tents this really was camping at its most basic.

Before dinner, we set off for our evening stroll. Towering termite mounds 10ft tall scattered the island and as the setting sun painted the papyrus a golden-orange, it wasn’t long until we arrived at a nearby hippo pool. An African sunset is always a special moment, never to be missed. And as we stood on the bank, deep in the heart of this wilderness with hippos snorting and splashing in front of us, and the storks settling in the trees, we watched the giant sun slip behind horizon. Without delay, the chorus of insects commenced, and we headed back to camp for dinner. As a thousand stars twinkled in the deep sky and the orange shadows danced from the fire up, onto the trees above our camp, the water sparkled with green fireflies. They flickered amongst the reeds creating an enchanting scene that I will long remember. There is nothing more exhilarating than camping in the African wild, falling asleep to the symphony of nature. With the frogs and insects bleeping in the background, a rasping roar rumbled through our camp… 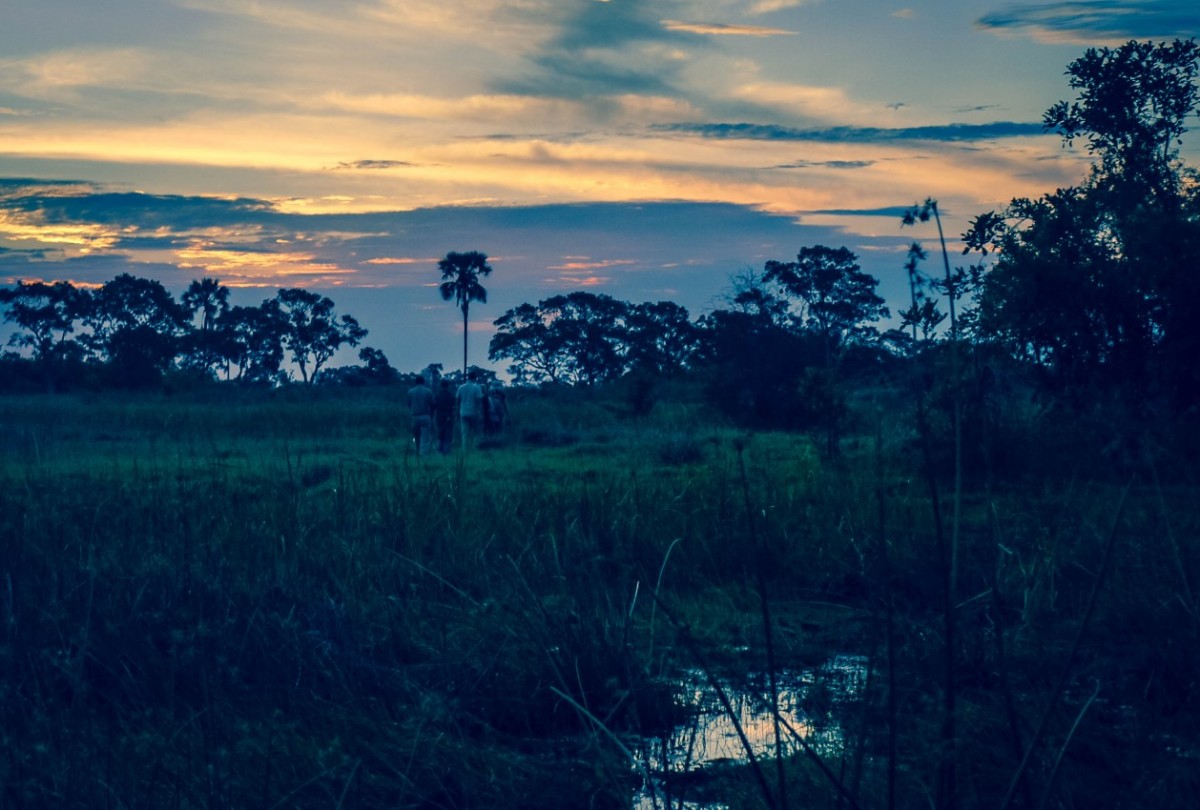 It was early morning and the bee-eaters chirped amongst the reeds as the still water mirrored the pink sky. The perfect reflection, every so often, was disturbed by the odd insect skating across the surface. It wasn’t long until we arrived at a nearby island, we left our mokoros on the bank and stolled off into the bush. Silently, single file. Wildlife here is treasured so much that guides are not permitted to carry any fire arms. The penalty here, for shooting an animal is a lifetime in prison. With our hearts racing at every noise or movement, magnificently wandering across the plain, came two bull elephants, lush grass hung from their mouths as their trunks reached into the air to catch our scent. Only a few metres away we crouched vulnerably behind some palms.
After a four hour, stroll across the delta plains, in near 40°C , the pristine water became too inviting. A shallow channel stretching from our little island spread out into a deeper pool, framed by the lustrous reeds and shimmering lillypads, this serene setting, was the perfect place to cool off. Despite the slight danger of lurking crocodiles or a grouchy hippo I decided to wade in. My feet entered the pure, clean water, so clear I could see them touch the sandy bed. As I moved down the glistening path of water past the African jacana silently tiptoeing across the giant pads, I spotted frogs clinging tightly to the reeds, perfectly camouflaged as tiny fish darted beneath the water. The African sun shimmered on the still surface whilst the water lilies floated like majestic white jewels. Metallic blue dragonflies hovered above the water, glinting in the searing sun. Forbidden to use soap in fear of polluting the pure waters, this pleasant dip was also a chance to wash. 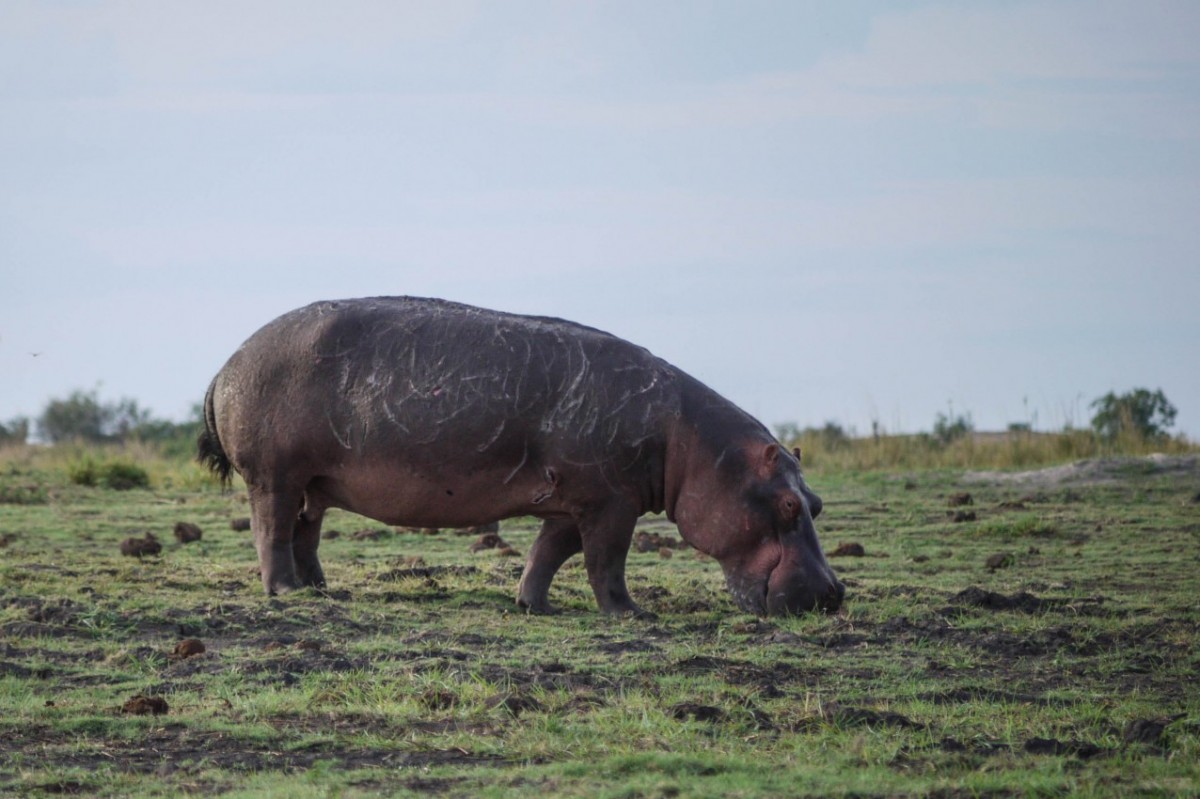